To share your memory on the wall of Mr. Carmino \"Carlo\" Rossetti, sign in using one of the following options:

Provide comfort for the family by sending flowers or planting a tree in memory of Mr. Carmino "Carlo" Rossetti

A receipt has been emailed to the address provided. A receipt may also be printed.

Provide comfort for the family by sending flowers or planting a tree in memory of Mr. Carmino "Carlo" Rossetti

Mr. Carmino “Carlo” George Rossetti, age 91 years, passed away peacefully in Southbridge Pinewood on Monday, March 22, 2021 with his family by his side.

Mr. Carmino “Carlo” George Rossetti, age 91 years, passed away peacefully in Southbridge Pinewood on Monday, March 22, 2021 with his family by his side.

Carlo was born in Port Arthur on January 29, 1930 and was proudly raised in Westfort. He attended local schools before starting his career with Great Lakes Paper, where he was a dedicated employee for 48 years, until retirement in 1992. Carlo met the love of his life, May Andrews and they were married on February 2, 1957. Together, they raised their daughter Lisa, and enjoyed travelling as a family. Time spent at Arrow Lake was always a passion. Carlo was a huge animal lover, especially his dog Lucy. He also loved cutting hair, fixing lawn mowers and sipping back a good cold beer.

Carlo was a kind, gentle, soft hearted and, most importantly, patient man. His last few years were spent at St. Joseph's Hospital, until he was moved to Pinewood Court in November, 2020. Carlo enjoyed joking around with everyone that cared for him. He was known for his great sense of humour and was content with whatever life threw at him. He never complained about anything. Even though she was far away, Carlo talked to his daughter Lisa every day. He will be always remembered by his family and friends.

He was a long-time member of St. Agnes Roman Catholic Church and the DaVinci Centre.

Carlo will be deeply missed by his wife of 64 years, May; daughter Lisa Langley and two beautiful grandchildren, Lauryn and Marissa Langley. He is also survived by his brother John; sister-in-law Cheryl Rossetti; niece Jessica (Jay) Matyczuk and nephew Ricky Blewett and his family in Rochester, Minnesota as well as numerous other nieces, nephews and relatives.

He was predeceased by his parents, Rocco and Lizzie Rossetti; siblings Henry, Art, Frank, Rita and Lena; and his in-laws Nellie and John Andrews.

A private family service will be held for Carlo in St. Agnes Roman Catholic Church. Interment will follow in St. Patrick's Cemetery. Should friends so desire, donations made in memory of Carlo to the Huntington Society of Canada or a charity of choice would be greatly appreciated.

Donations are being accepted for: HUNTINGTON SOCIETY OF CANADA.

We encourage you to share your most beloved memories of Mr. Carmino "Carlo" here, so that the family and other loved ones can always see it. You can upload cherished photographs, or share your favorite stories, and can even comment on those shared by others.

Our Deepest condolences to May and family. Thinking of you at this sad time. May he Rest In Peace, Prayers 🙏 to the family!! From Pam Perrier 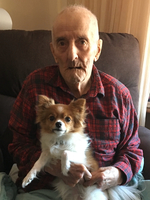